What is a Blue Star Flag?

The Service flag is an official banner authorized by the Department of Defense for display by families who have members serving in the Armed Forces during any period of war or hostilities the United States may be engaged in for the duration of such hostilities.

The Service flag, also called the Blue Star Flag, was designed and patented by WWI Army Captain Robert L. Queisser of the 5th Ohio Infantry who had two sons serving on the front line. The flag quickly became the unofficial symbol of a child in service. President Wilson became part of this history when in 1918 he approved a suggestion made by the Women’s Committee of the Council of National Defenses that mothers who had lost a child serving in the war wear a gold gilt star on the traditional black mourning arm band. This led to the tradition of covering the blue star with a gold star on the Service flag to indicate that the service member has died.

During WWII the practice of displaying the Service flag became much more widespread. Most flags were hand made by mothers across the nation. One of the most famous flags was that of the five Sullivan brothers who all perished on the U.S.S. Juneau.

The Blue Star Mothers was founded as a Veteran Service Organization and was part of a movement to provide care packages to military members serving overseas and also provided assistance to families who encountered hardships as a result of their son or husband serving in the war.

In 1960 Congress chartered the Blue Star Mothers of America as a Veterans Service Organization and in 1966, the Department of Defense revised the specifications for design, manufacture and display of the Service flag.

The Department of Defense specifies that family members authorized to display the flag include the wife, husband, mother, father, stepmother or father, parent through adoption, foster parents, children, stepchildren, children through adoption, brothers, sisters and half brothers or sisters of a member of the Armed Forces of the United States. The flag should be displayed in a window of the residence of persons authorized.

The Service flag may also be displayed by an organization to honor the members of that organization serving during a period of war or hostilities.

The Service Flag is an indoor flag and should be flown facing out from the front window of the home or organization.

Display of a Service Star Banner is done during times of war. Once again families are displaying banners at home. Blue Star Flags may be purchased through the internet, at stores, or made by hand. 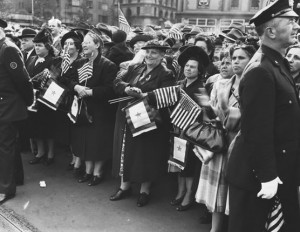 If you see a banner in a window, magnet on a car or a pin on a lapel, please give pause for a thought and prayer for our families.